Good meeting yesterday in Lynchburg.  Chris Wiley did a great job challenging us to look at operations and its research differently.  He gave us an overview of the resources available at the Chesapeake & Ohio Historical Society which are available for other roads and historical societies even if they have other names for the resources.  Afterwards we were treated to Chris Wileys layout and Jim Moseleys layout.  I hope you enjoyed the day as much as I did and plan to join us at Lake of the Woods in March.
By Drphilster - January 12, 2020 No comments:

The Church is the site of a funeral for a member of its community and has asked us to park in the back of the Church. Please leave the front lot, the street and the overflow lot across the street for mourners.  Thank you for your understanding 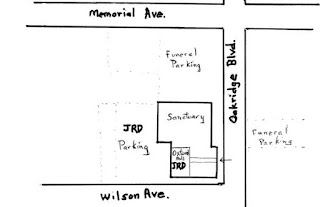 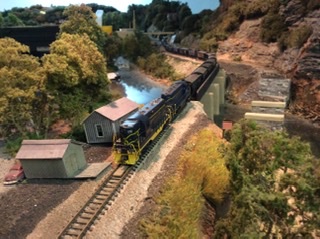 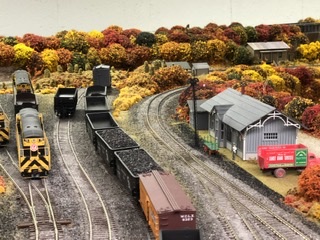 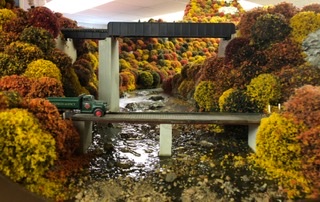 I am looking forward to the next meeting in Lynchburg on January 11th, 2020. We have two Chesapeake & Ohio layouts on the tour with Chris Wiley doing an overview of his CTC equipped James River Sub along with lessons he has learned along the way.  I am still looking for the second clinic as my first choice fell through recently.  If you are interested let me know.

Details about the meeting here
By Drphilster - December 31, 2019 No comments:

On Saturday the 16th of November, we’re in for a bit of treat as the Potomac Division in company with the James River Division to have a day together for several clinics, some layouts to visit, and lots of time for socialization where we can talk about model railroading together.
Doors open at 9 am and we’ll gather together in Room 109 for a few words, a cup of coffee, and maybe even a donut or two. After that we’ll have two tracks for clinics where you will have a selection of four clinics before lunch. After the clinics, we are planning to hold an open discussion on the Achievement Program where you can bring your models and we can either do an evaluation for an award or just discuss whatever you want regarding all aspects of the Achievement Program with at least three MMR’s. We’ll have a modeling theme as well so that you can bring your models for display and popular vote – theme is: a scratchbuilt or kitbashedpiece of rolling stock that you built.
Lunch will be on your own – plenty of local options for foragingwithin 20 minutes along Rt. 29/15.
In the afternoon we’ll have at least two layouts open to visit in thegeneral area. So come on out for our November end of the year fling!

Jerry Stanley - “Building the Building for Building the Layout”
In the clinic I’ll talk about the process to select a building site. I hope to have a video loop playing of the actual construction drawings of the "Hobby Barn" playing on the flat screen TV. In the clinic I will go throughwhat type of building to build on different terrains, the basic requirements to provide a set of plans for a building permit, and “things to consider”when designing your hobby room building.

Rod Vance - "Vinegar, Pickles and Railroads ... Oh My!"
This clinic talks about modeling the pickle and vinegar industries during the time period from the late 1800s to the early 1970s. We'll talk about how pickles and vinegar were made and processed, including looking at the typical structures and facilities used in their production. We'll also talk about the special railroad cars used to transport pickles and vinegar. We'll finish by surveying some of the structures and freight car models commercially available that can be used to represent the pickle and vinegar industries.

John Sethian - "Modeling in 2 rail O Scale”
O Scale has many advantages:  The larger size gives the feel of heavy moving machinery, and fine details can be added and seen without heroics.  O Scale is not outrageously expensive, does not require an aircraft hangarsize space, and most equipment is readily available. The talk presents the basics for O Scale modeling, including sources, suppliers, and techniques.

Terry Terrance – “Modeling the B&O West End”
How does one go about modeling an iconic, yet isolated and obscure part of the Baltimore & Ohio's original main line? This clinic will describe how I went about it.
• The seed of an idea.
• Objectives?
• What to include, what to omit.
• Developing the track plan
• What time period?
• Locomotive roster
• Rolling stock fleet
• How I built the layout: civil engineering, electrical engineering, etc.
While I built my representation of the West End in O Scale, this clinic will be as scale agnostic as possible.

Terry Terrance – The M&K Junction Model Railroad (O Scale)
Part of the “double humped” B&O crossing of the Allegheny mountains, the grade on Briery Mountain (Cranberry Grade), the crossing of the Cheat River at Rowlesburg, WV and the grade up Laurel Mountain (Cheat River Grade), is depicted in condensed form on this layout. Rowlesburg was a helper station as trains needed to be pushed up the grades in both directions out of Rowlesburg. The Morgantown and Kingwood Railroad (merged into the B&O after 1922) interchanged with the B&O at Rowlesburg, ergo the railroad's name for Rowlesburg – M&K Junction. The time period is late 1949 through early 1952 – the period when diesels and steam co-existed at M&K. Seven, four-unit F7 diesel sets arrived in 1949 and were so superior in heavy mountain railroading that the subdivision was dieselized in 1952.

The track is designed to create the feel of the prototype with heavy grades and very little tangent (straight) track and to be “scenically sincere”, that is, trains pass through a scene only once. There are few on-line industries on the prototype and few will be included on the model railroad (some have been added for scenic/operational interest). A model of the B&O's 4 stone-arch Tray Run Viaduct is planned. The model will be 2/3 full scale size and over 6’ long. The B&O's crossing of Cheat River is represented with a truncated single span bridge.

The basement is approximately 25 ½ x 36 feet. Minimum mainline radius is 60”, and that is only on the inner track on one curve. The minimum radius elsewhere is 62” or larger. The layout is 2-rail, “O” scale. The layout runs on a Digital Command Control (DCC) system using a combination of Lenz power/command stations; Java Model Railroad Interface (JMRI) software and computer control; JMRI WiFi throttles running on Android devices; and locomotive and accessory decoders from many different manufacturers
By Drphilster - November 08, 2019 No comments:

The JRD had a good meet in Charlottesville today at Rail Tales.  A special Thank You to owner Bret Jones for not only hosting us but doing a hands on clinic for our members and guests.  Most of us weathered a car or two resulting in cars that either looked grimy or toned down the plastic sheen on our cars.  After the clinics we had the privilege of seeing Bob Macionis layout which has really come along far further than many of us thought possible in such a short time.  A real testimony to Bob’s dedication to his layout’s construction and it gives hope to that by years end it might be ready for early operations testing.   Thank you to all who came and I hope to see you in November at the joint meet with Potomac division in the Warrenton-Gainesville area.  Please note this meet will be on November 16th which is a week later than normal for us.
By Drphilster - September 14, 2019 No comments:

Good News for the Hobby

This good news for the hobby was posted this afternoon

NorthWest Short Line is pleased to announce that the entire line has been acquired by an NWSL employee, effective September 3rd, 2019. All existing back orders will be filled, and NWSL will be open to new orders as soon as the new websites are rolled out; the primary website nwsl.com will carry forward as the primary contact point. The line is expected to carry forward largely unchanged although the company will no longer offer phone support. NWSL will be headquartered in Kila, Montana, located near Kalispell, and the new address is PO Box 219, Kila, MT 59920. Email contact is through the website.
By Drphilster - August 19, 2019 No comments: